In a minute I will turn over this post to James Lawther, this month’s guest blogger. But first an introduction.

Charlie “Tremendous” Jones said, “You’ll be the same in five years as you are today, except for the people you meet and the books you read.” And one of my professional development mantras is “Commit to lifelong learning.” The internet and social media gives us all the opportunity continue learning from others, meeting new people on-line to stimulate and continue a discussion about topics that are important to us. I enjoy reading and exchanging views about customer service, leadership and operational excellence. In that pursuit, I connected with James via Twitter and subscribed to his blog immediately after reading his bio:

To reach this highly elevated position he has worked for numerous organisations, from supermarkets to tax collectors and has had several operational roles including running the night shift for a frozen pea packing factory and doing operational research for a credit card company.

As you can see from his CV he has either a wealth of experience, or is incapable of holding down a job. If the latter is true this post isn’t worth a minute of your attention.

Unfortunately, the only way to find out is to read it and decide for yourself.

You’ve got to agree that someone with that kind of broad professional experience and sense of humor about it is well worth following. Since subscribing, we have exchanged comments on each other’s blogs and via Twitter  and I have really enjoyed the dialog. If you are intent in driving continuous improvement for your business, I’d recommend learning from James by visiting his website.

So, without further ado, James Lawther:

Today I am going to infect you with some viral wisdom.

If you haven’t been struck down yet, viral wisdom is the plague of the 21st century.  Victims suffer with assorted symptoms including lost time, vague fleeting thoughts and exasperated looks from their husbands.  The infection passes from friend to friend via the links they post on facebook, and the e-mails they send.  The wise realise that the most contaminated place in the world is the twitter stream sitting on their very own iphone.

The most contagious strain of viral wisdom cloaks itself cunningly.  It appears to be very sensible, creates a palpable “a-ha” moment in the mind of the reader, is a little bit (but not too) clever and compels you to read on because you never know, it could be really informative (unlikely, but possible). 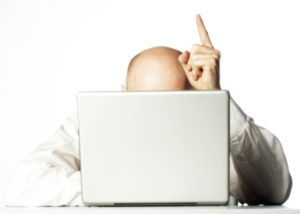 The first piece of viral wisdom I have for you came from my twitter stream:

Modern Art = I could do that + Yeah but you Didn’t

It is hard to be wise in 140 characters but I’m sure you can take some meaning from that, did you feel the “a-ha”?

The second piece of wisdom came form an e-mail a friend sent me.  It was an interview with Will Smith.

Before I share it, I need to set the record straight, I like Will Smith, I used to watch the Fresh Prince of Bel-Air avidly and Men in Black has to be one of the world’s greatest movies, (well the eight foot tall cockroach was worth seeing) but let’s be honest, Mr. Smith isn’t exactly remarkable is he?

Having said that he is an extremely successful man, and by his own admission, he didn’t get there off the back of raw talent.  So how did he do it?  In his own words:

And there is the second piece of viral wisdom.

If you want to be successful there is no substitute for hard work.

What does that mean for you?  Simply this…

Delivering great customer service isn’t really that difficult, you don’t have to be a rocket scientist to:

Or to put another way:

Now would be a good time to stop stumbling, digging or reading blog posts, and give Bill a phone call so you can make a start.

Alternatively, if you want a little more quasi wisdom, you should read my blog about service operations.  It is quite infectious.